When you analyze a ranching operation to see what really makes it tick, it is a combination of many factors that leads to success. Ownership, management, genetics, resources, product, marketing and the list can go on and on. If you have the chance to visit Limestone, LLC, you will see first hand that this operation has the right mix of all of the aforementioned items that lead to success. Let’s see what was learned during this recent ranch visit.
Owner, Chris McCutchen, maybe better known as “Big Daddy” in the Angus circles is a big man with a big heart. He cares and cares a lot about his employees, his friends and the beef cattle business. Little did Chris know that when he started in the cattle business in 1989 that he would reach the level of respect as a breeder of Registered Angus that he has today. First, commercial cattle of several breeds were the backbone of his operation. Chris added registered Angus genetics in 1999 with purchases from Express Ranches, Pollard Farms, Pfeiffer Farms and Gardiner Angus Ranch. With a select foundation laid, his goal was to run around 200 head of cows, all black and slowly grow into an Angus seedstock source.

The cattle inventory grew and the workload increased. For Chris to realize the full potential of his Angus operation additional management skills were required. Mike Marlow had been employed in a management position with Akerman Cattle Company near Purcell. Mike had experience with registered Limousin cattle and was “learning the ropes” in the purebred business. Chris offered him a job to manage the growing Angus operation. Together, they are the team recognized as Limestone today. As they set goals, they had an idea of what they wanted to accomplish in the purebred business, but it grew bigger and faster than they ever dreamed.
Today’s operation includes 8,500 acres of owned ranch land, mostly Bermuda, Midland 99, and native grasses along with 1,500 acres of leased pasture. The operation also includes around 350 acres of alfalfa to provide the needed forage for winter feeding. Around 1,000 acres are over seeded to wheat in the fall to provide winter grazing. The ranch supports 500 registered breeding age Angus females, plus a recipient cow herd that produces an additional 200 embryo calves annually. The ranch headquarters is located six miles East of Perkins and one half mile North and lies about three miles North of the Cimarron River.
“Rock Solid Genetics” is the marketing slogan that Chris and Mike have utilized as it ties to the Limestone name, and truly rock solid genetics are in place in today’s breeding program. Elite donors with impeccable and proven production records are the heart of today’s cow herd and they include such greats as GAR Prime Time 2409 who currently ranks fourth among proven dams for IMF; WK Blackbird 9045 (one of Chris’s favorites) and is the top income producing female at Limestone with nearly $300,000 income generated in sales; WCC Primrose J146, a maternal sister to N Bar Emulation EXT and GAR EXT 2104, the dam of GAR Precision 2536, the Angus breed’s number one dam. These are just a few of the famous families that are producing young females that have the potential to surpass the earning ability of their dams. 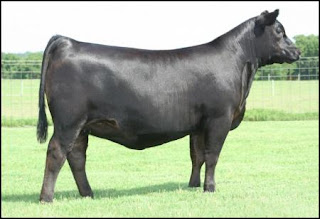 “Rock Solid” herd bull power is headlined with Rito 4I6 of 2536 6807, a son of the famous GAR Precision 2536 sired by the legendary DHD Traveler 6807. This two year old herd sire has all of the credentials to be one of the breed’s great ones. Two maternal brothers from the Migonne 702 dam include BC Marathon 7022 who ranks in the top 1% for Ultrasound Rib Eye Area and BC Lookout 7024 who tested homozygous for all tenderness markers through GeneSTAR and the newest addition, BC 7022 Raven 7965, the number one Ultrasound Rib Eye bull in the Angus breed (over 56,900 Angus bulls were scanned). With the credentials that this young herd sire line-up possesses, the Limestone breeding program is set to reach an even higher plateau in the upcoming future!
As the herd grew, so did the marketing strategies. Limestone, LLC first marketed their production as EXG genetics when they formed an alliance with Express Ranches and consigned regularly to the Express”Big Event” Angus female sale and to the EXG Ranchers Bull sales. But with expansion more rapid than either Chris or Mike anticipated, 2005 marked the year to try it on their own. They hosted their own version of a Limestone Angus bull sale for the commercial cattleman with over 100 bulls and their first Angus female production sale was held last fall. Their inaugural female sale set new records for the Angus breed for a first time event. 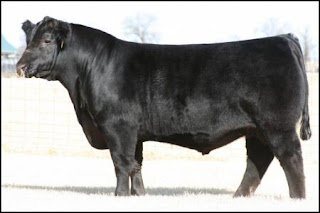 The only thing that we have not touched upon is resources. Besides the land which supports the ranch, Chris is co-owner of Goober Drilling, LLC which has drilling and exploration in Oklahoma and Texas. Goober Drilling employees over 600 people in their workforce.
Limestone, LLC, truly a Rock Solid operation. Great people, cattle that fit industry standards and it was a great visit!
By A. J. Smith